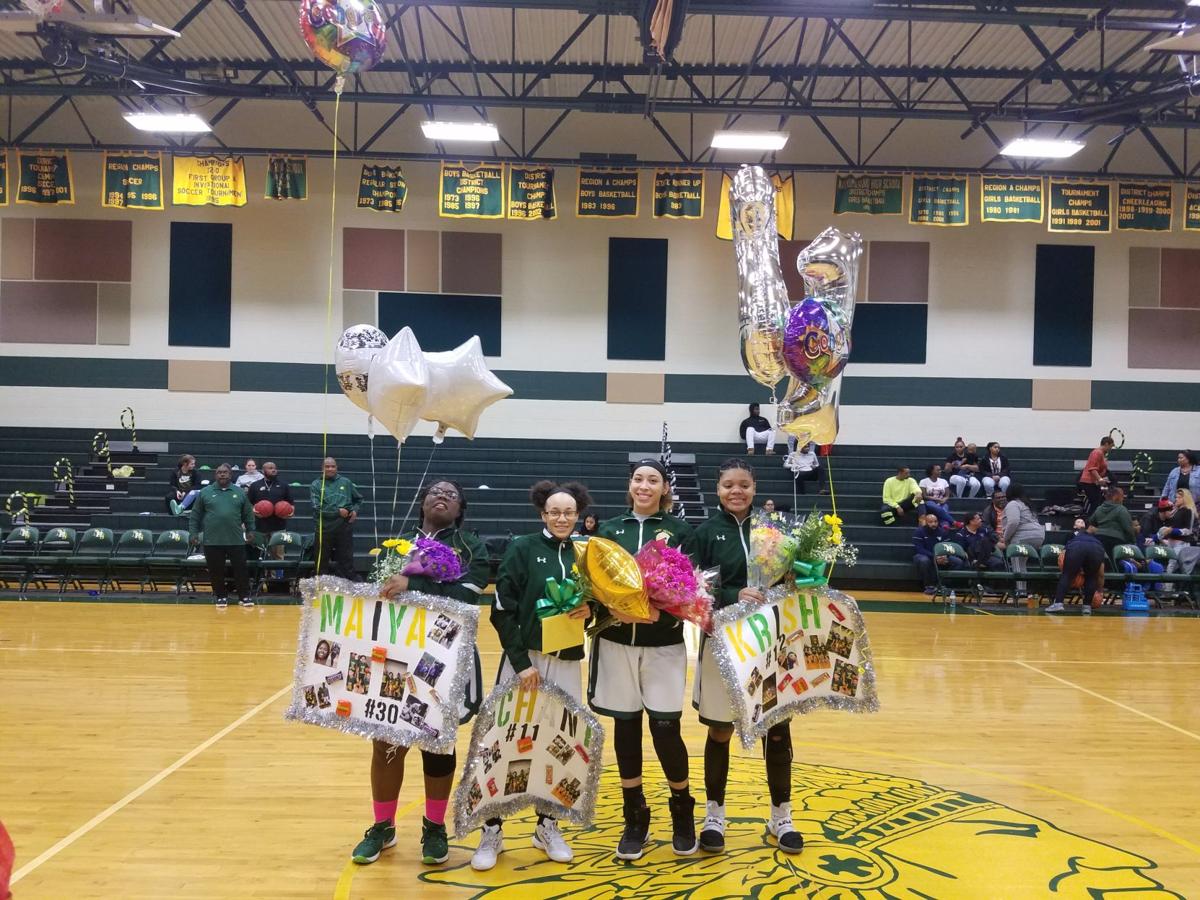 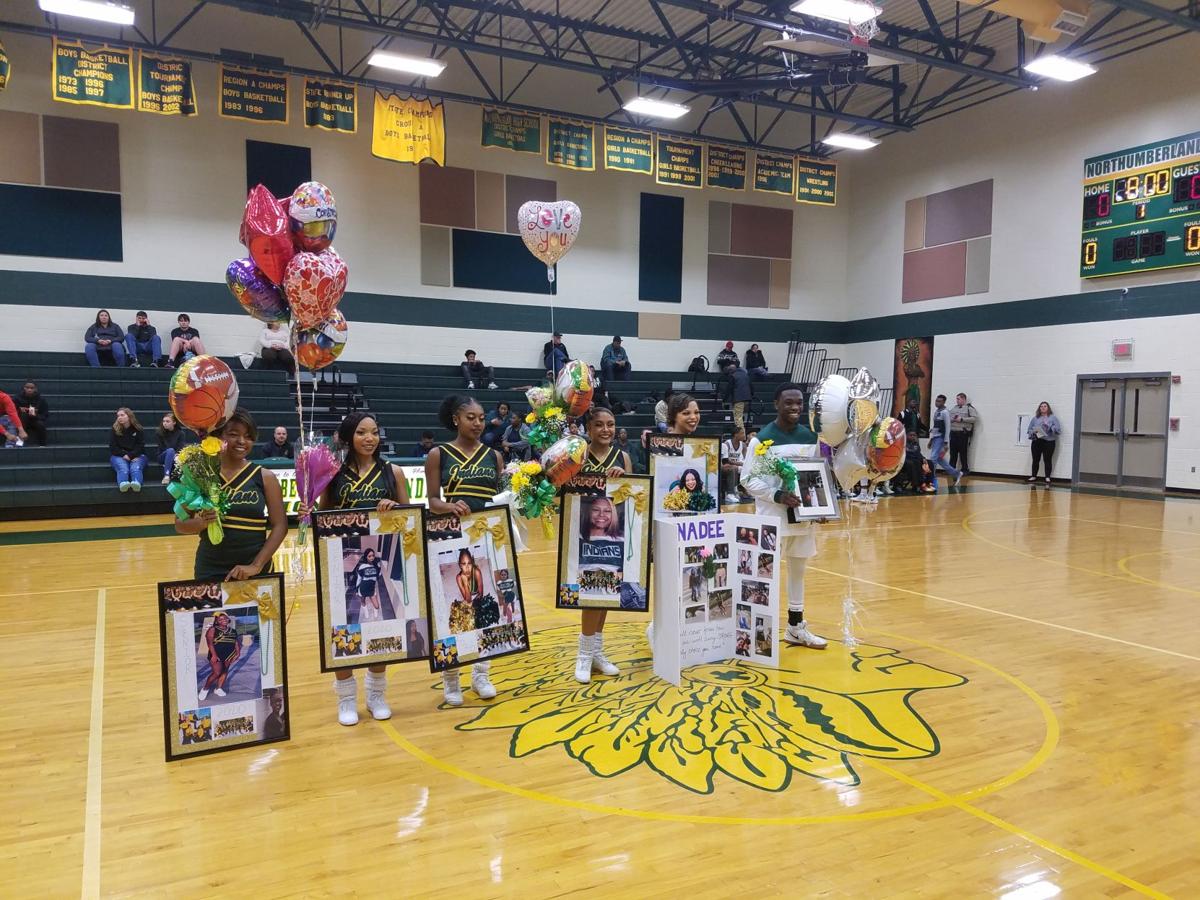 Thursday night was an opportunity for the stars to come out and the Indian sports fans an opportunity to both honor them and say goodbye to the seniors who will graduate this spring. Dr. Travis Burns made the opening remarks. He has always been a supporter of Northumberland athletics, and was once again a big fan despite some teams not having the best of seasons. He quoted the late Kobe Bryant, “‘Keep on grinding.’ Our teams kept grinding, kept working despite their records.” He thanked the seniors who had kept things going.

This year’s awards ceremony was postponed a week and for that reason several of the coaches and their staffs were not in attendance. First up was the wrestling team introduced by Coach Kevin Keeve, “It was a long season with the numbers down but we took second in the district.” Receiving trophies were Wrestler of the Year senior Alazar Shaffer with the Coaches Award going to Dylan Davis. The Cheerleader coach was not present so Teresa Rock presented Bernadette Blackwell the Most Valuable trophy with the Most Improved going to Dynesti Cottrell.

Next up was Coach Michael Stevenson and his staff. Stevenson said  “This team only returned one player from the  previous season. We played seven games against teams from higher divisions(some as high a 6A). We put them through the fire early. Inexperienced, it was a rebuilding year. Next year it will be different, rebuilding and learning is not over, the process is just begun.” He encouraged his players to participate in spring and fall sports and exhorted them to get in the weight room. He noted post season honors in the Northern Neck district, Jerius Morris as an Honorable Mention; Jeremiah Toulson as a second team selection and Markeem Waller as a first team member.  Waller received the Offensive Player of the Year award, the Defensive Player went to Toulson with senior Dionta Kelly getting the Leadership Award. Kelly in the opinion of this writer was the Spark Plug for the entire season. Stevenson noted “He kept us together.” But it was Kelly giving at least 110% despite the score.

Kevin Rice represented to Lady Indians coaching staff. He noted that the 2019-2020 Indians had won more games than the past three seasons combined, he also stated the team made the Northern Neck district playoffs for the first time in several years. The Coaches Award went to Lexi Grilliakis with the Leadership Award going to Kaylie Baker. Sophomore Tanaya Seldon was chose as first team all district and was the district’s leading scorer. Senior Ke’najah Johnson was a second team choice. Of the four graduating seniors, in this writer’s opinion the “Unsung Heroe” of the year was senior Kristian  Thompson. Not mentioned in the team stats very often, Thompson gave it her all when on the floor.

The spring season of play officially kicked off last week, or at least it was supposed to. Welcome to the season that is the athletic director’s nightmare, perhaps it would be better titled “When can we make up this game” season. Weather and a wet field struck down the Lady Indians soccer opening here against West Point on Friday, it will not be made up. With the exception of track, which got under way last Monday with coaches Trinity Bea and Aaron Lewis in charge, all other spring sports have finalized their rosters. The baseball team has thirteen varsity and ten JV players for the 2020 season beginning this week. The Lady Indians softball team has a varsity team of twelve with a JV of eleven. The most veteran team for the Indians is varsity guys soccer that has sixteen this year with seventeen on the JV. The Lady Indian soccer team which was set to kick off the spring season for Northumberland has the following varsity players with jersey numbers in parenthesis: Cristal Acosta (16), Johanna Ayala (8), Nigeria Ball (21), Bess Blake (5), Jayna Bramblet (15/27), Briasa Butler (18), Abby Gooch (12), Anna Jett (9), Jessica Lee (7), Cameron Lewis (10), Karen Martinez (2), Emily Rice (1), Camdin Sisk (3), Alice Sisson (11), Grace Sisson (14), and McKensey Smithart (4). The JV team has seventeen players.