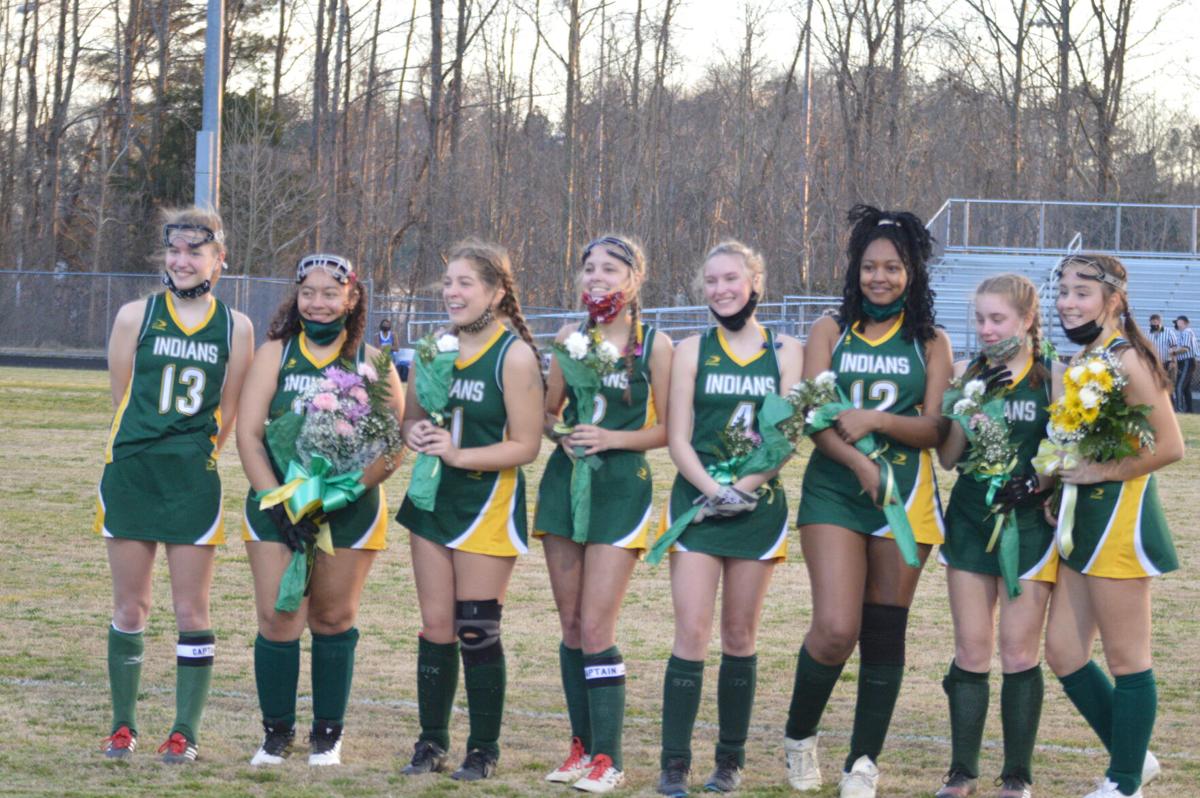 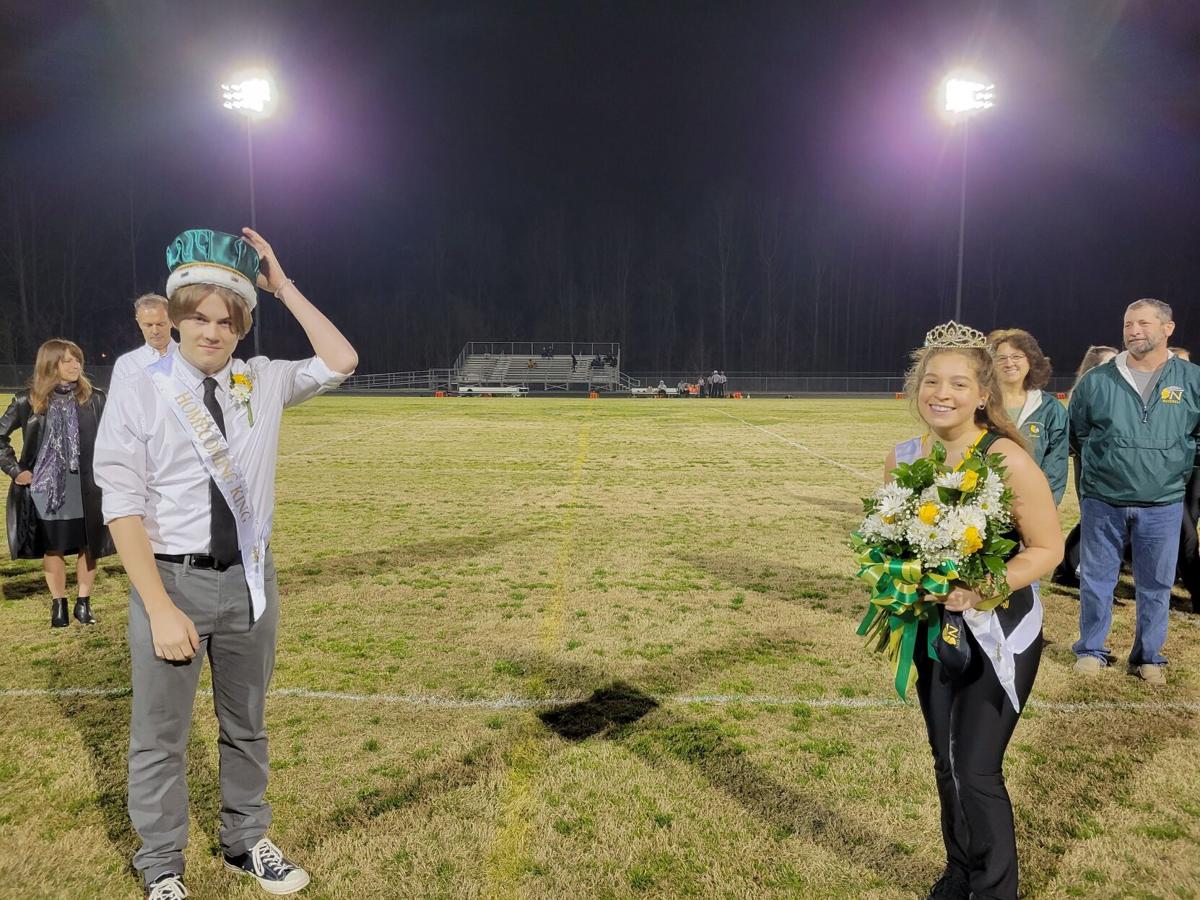 The second week of the rescheduled 2020-2021 fall season was very much like the first. A surprising win, a couple of close losses and another sport, field hockey, getting their season started. On Tuesday, the Lancaster golf team came to Quinton Oaks and topped the Northumberland team by one stroke, 188-189. Later that evening, The Lady Blue Devil volleyball team arrived and got a surprising welcome. The Lady Indians gave them a loss 3-2, something that hasn’t happened in several years.

On Wednesday, cross country season opened on the Northumberland course. The Indians were not able to field a team but had some very good results from individuals as the West Point team swept both the girls and guys races. On Thursday, the field hockey team hosted class three Caroline, losing 6-0. Friday night saw Northumberland celebrating both Senior Night and Homecoming for the only home game scheduled this season, losing to a powerful St. Michael the Archangel team, 8-6.

Northumberland fans are reminded, even though the number of fans for outdoor games has increased, you must have a ticket in hand when you get to the gate. Also you must wear a mask and try to stay six feet away from folks that don’t live in your house.

Lancaster was not sure they could field a golf team this year but came to Quinton Oaks with six. The Indians could only field four so they played as four-man teams. For the second week in a row, the Indians had the medalist with Chase Fisher shooting a 36. The golf team is off next week returning to action on Monday, the 23rd with Rappahannock at Quinton Oaks.

Tuesday’s volleyball games were tough and close. “We had to come from behind in a couple of them,” explained varsity Coach Anjelica Scott. The Indians won the first game, Mathews came back to take the second, the Indians the third with Mathews tying it up by winning the fourth. The Indians took the fifth to win the match. “Yes, we had a couple of games that we played really good,” said Scott. “Overall the girls played well.” The JVs also took their match, two games to one.

“It was just early in the season,” said Indian’s Coach Trinity Taylor about Wednesday’s cross country meet at home on Wednesday. West Point ran away with the three team meet scoring 18 for the guys and 19 for the girls. The Indians had some fine individual results with Camden Sisk taking fourth (26:35) and Sophia Saparana coming in ninth (32:47) in the ladies race. For the guys, Grant Biddlecomb was eleventh (24:30) and Quinton Jones finishing twelfth (26:19). The harriers hit the roads for the next two Wednesdays at the Golden Eagle Golf Course.

The Caroline field hockey team came to town with two victories under their belts and eight returnees on their roster. “They were much better than they have been in recent years,” was Indian Coach Mark Fridenstine’s initial comment. The teams played fairly evenly in the opening quarter which ended in a scoreless tie. Within the first minutes of the second, Caroline scored and then added two more to take a 3-0 lead at half time. They added two more scores in the third quarter and a final one in the fourth. The fast pace of the game took its toll on the Lady Indians. They are currently schedule for a second game later this month when they travel to E.C. Glass in Lynchburg. Fridenstine stated, “I thought we started out pretty good. The hustle was there. Caroline scored on several’“break aways.’” Even with the score as one-sided as it was, freshman goalie Nora Bowles had twenty saves. Jayna Bramblet, Emily Rice drew praise and Grace Blair also for her play defensive mid fielder. “Overall, I think we learned a lot,” was his final assessment of the team’s first game.

When Northumberland Football Coach Aaron Lewis looks around for a team to fill up his team’s schedule, he doesn’t look in the “weak” category. Case in point, the scheduling of St. Michael the Archangel Warriors, a private school from Fredericksburg and the 2019 Virginia state champion in their group. “I thought we played a great game,” he said. “We followed our game plan.”

The two teams battled it out in a scoreless first quarter with neither gaining a strong advantage over the other. St. Michael’s put together a 14-play, 56-yard drive to get the game’s first TD. It came on a one yard run but the try for the two point conversion was stopped. The Warriors are a ball control, running attack team that believes as long as you have the ball, the other team can’t score. At half time it was 6-0 for the Warriors from St. Michaels.

In the third period, Northumberland put their own drive into the game, moving fifty yards in ten plays. Mixing a running attack with a few passes and closing with Kevin Edwards blasting over from the six. The Indians also missed the two point try and the game was tied. Late in the same quarter, the Warriors recorded a safety to take the lead and the game 8-6. In the final quarter, Northumberland had a couple of drives but they were stopped short and the Warriors held the ball for the final two minutes.

Unofficially, Trenton Liner led the hit parade with eight stops. If you have been to a Northumberland football in the last three years, you have heard the name “Mad Dog.” That’s Linear’s nickname given to him his eighth grade year when the coaching staff said he growled at the line. At St. Michaels, Linear was in the backfield almost as often as their backs were. “I felt I had to prove myself,” he said. “I’m playing every game like it is my last.” Nicholas Mothershead had five stops, Lavar Churchill three with a fumble recovery. “We played great,” said Lewis. “We played a tough team.” And even with the loss, “everybody was upbeat.” The Indians travel to Lancaster this weekend, to play on Friday night if the stadium lights are working or on Saturday noon if they are not.