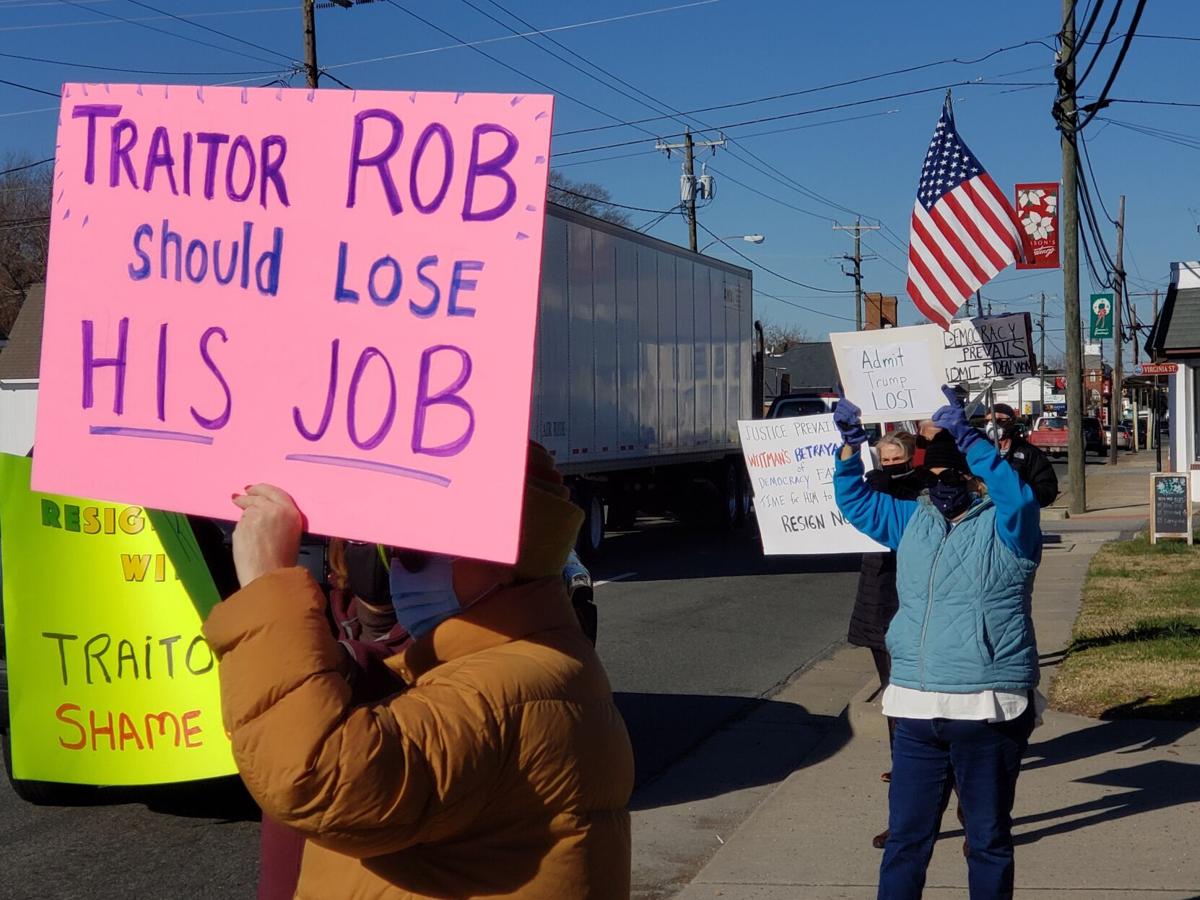 When Representative Rob Wittman signed the amicus brief backing a Texas lawsuit related to the November general election, it was a breaking point for some District 1 voters. And they made that known by protesting at Wittman’s Tappahannock office.

On Thursday and Saturday, protesters came from counties across the Middle Peninsula and Northern Neck armed with signs bearing phrases such as “Traitor Rob” and “Wittman chose Trump over democracy.”

Many of those protestors expressed long-running frustrations with Wittman about issues ranging from the lack of real progress on broadband to his supporting the reversal of environmental protections.

“This protest is a statement of how unhappy we are about his action in the 1st District,” said Cyanne Gates, chair of the Essex-Richmond County Democrats, which was one of the groups involved in planning the event.

And Wittman signing that amicus brief  “is a seditious act,” she added.

A Northumberland resident named Karen explained that she served over 20 years in the army under the oath to defend the Constitution against all enemies foreign and domestic. “What he’s done is basically treason against our country by making an effort to deny the election results,” she said.

She was one of several people who expressed determination to be heard despite warnings of protesting in the “deep red” Northern Neck due to the potential for reprisals.

“My husband didn’t want me to come. He said ‘you know where you are’ meaning this is Trump redneck country. And I was like, I know where I am. And no one is going to take away my rights to make my voice heard when there’s something wrong or some injustice.”

Although Essex is still deeply red, Sarah L. of Tappahannock said the area is changing and she is aiming to connect with more people in that wave of change. She hopes the protest will make those individuals aware that there are others who feel like them.

“It’s outrageous that Wittman would compromise our election like this for his own gain. He was elected. We accept that. But he’s supposed  to represent us. He should be representing all of his constituents. And doing that means [him also accepting that] a fair vote is a fair vote,” she said.

No representation, no communication

One recurring gripe with Wittman is his alleged failure to represent constituents outside of the Trump base.

“I am so disappointed in the congressman, said a protestor named Stewart who is a “former Republican” and “not a Trump supporter.”

“I threw a meet-and-greet for Wittman some years ago,” he said. But “Wittman isn’t a Republican anymore either. He’s just a Trump politician” who “only represents a small portion of the Trump base.”

“This isn’t really about Republican or Democrat,” said Zack who came from King George. “What’s happening here is democracy is being discounted. It’s being stomped on. The constitution isn’t being heard and the voters aren’t being heard… just to appease someone who is going out of office,” he said referring to President Trump.

And he added, “the constitution doesn’t give us a workable solution for a situation like this where members of Congress are basically trying to overturn the most legitimate and secure election in U.S. history, according to Chris Krebs,” a Republican appointed by President Trump to oversee election security.

Protesting is one of the only outlets he and others feel is available to them,  because they say Wittman will not interact with known Democrats.

“We have given up writing and emailing him. We’ve asked him to meet with us in Essex. Yet, he comes down and has breakfast and lunch with county leaders who he knows are Republican,” said Gates.

Meanwhile, as Wittman allegedly ignores his Democratic base, he’s gone too far in pandering to the president and his supporters, the protestors claimed.

“He pretends he’s a nice guy but he is not. He has really gone to the dark side. And it’s very troubling,” said Sarah.

“Frankly I don’t see the difference between all the young men who started to fight for ISIS because the world was changing. Women were getting stronger and they felt they didn’t have a place in that world. And that’s what’s happening here.”

A lifelong Essex County resident who identified as white but doesn’t want to be named also blames the fear of change.

“White people are scared to death they’re going to be minorities soon, which they will. But so what. What was America full of before white people got here. Wittman rubber-stamping Trump is his own profanity and it only serves a few people,” the man said.

Asked whether he believes Wittman is driven by that fear, he replied, “that’s an excellent question, and I think about that.”

“Because when you go join that bunch what are your reasons? Is it for your personal doctrines or are you just doing it for the money? Is this man so small that he’s impressed by the big wheels that give him these opportunities? Is he just doing it for the money? Or, does he truly believe this crap? Maybe it’s one or all three. But any one of them is not what I call being of service,” he added.

After the second day of protests, Gates said they taped their signs to Wittman’s office. A man who identified himself as “Trump supporter” immediately tore them down and put them in the trash, leading to a heated conversation.

After he left, she said they retrieved the signs and retaped them to the building, but by 11 a.m. Sunday, there was no trace of them.

The Democratic groups that were involved in this protest are now considering holding a protest at another location, perhaps the courthouse in Montross, since that’s Wittman’s hometown.

In a statement provided by Wittman’s press secretary Jacob Miller, the congressman countered claims made by the protestors and clarified his position on the election.

“It remains, and always has been, crucial to me to ensure that every person I represent in Virginia’s First District has their voice heard in Washington. Over the past several years, many Americans have questioned the transparency and accuracy of our electoral system.

“In 2005, Congressional Democrats challenged the electoral votes of Ohio during the 2004 presidential election; in 2016, many believed bad actors from outside of the United States worked to undermine our election processes; and following the 2020 election, I heard from many constituents whose confidence in the election has been shaken because of perceived examples of irregularities and potential fraud in the voting process…

“Specifically, Article II, Sec. 1, cl. 2 of the U.S. Constitution states that Presidential Electors must be appointed according to rules established by each state’s legislature. But in the months before the 2020 election, those rules were deliberately changed in certain states, not by their legislatures, but by governors, secretaries of state, election officials, judges and/or private parties without the approval of the states’ legislatures.

“In the end… the Supreme Court decided not to answer that question, and I respect the Court’s decision. That is what makes this Nation great: following due process, letting our system work and ensuring that the voices of all Americans are heard.”

With that, Miller included a picture of the Wittman’s office covered with protest signs.