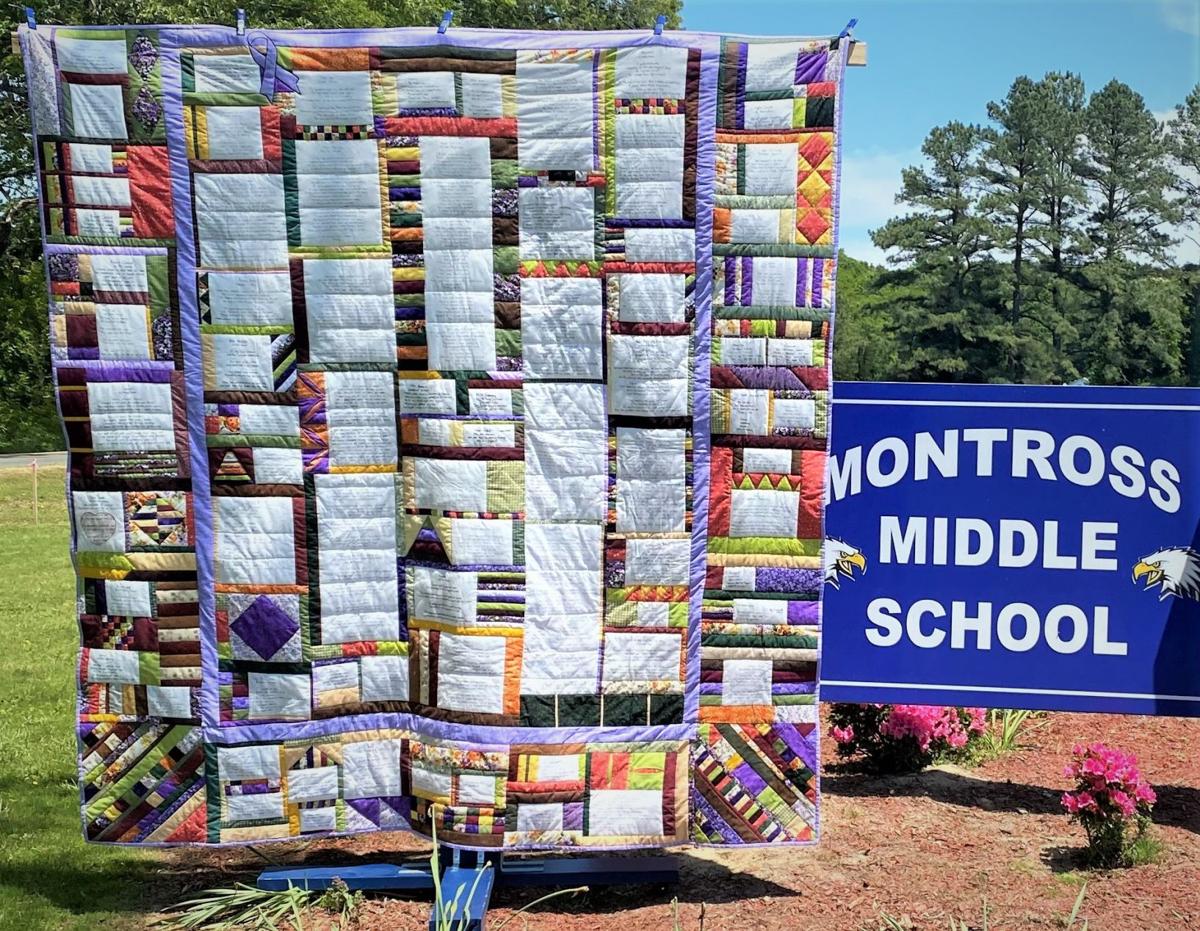 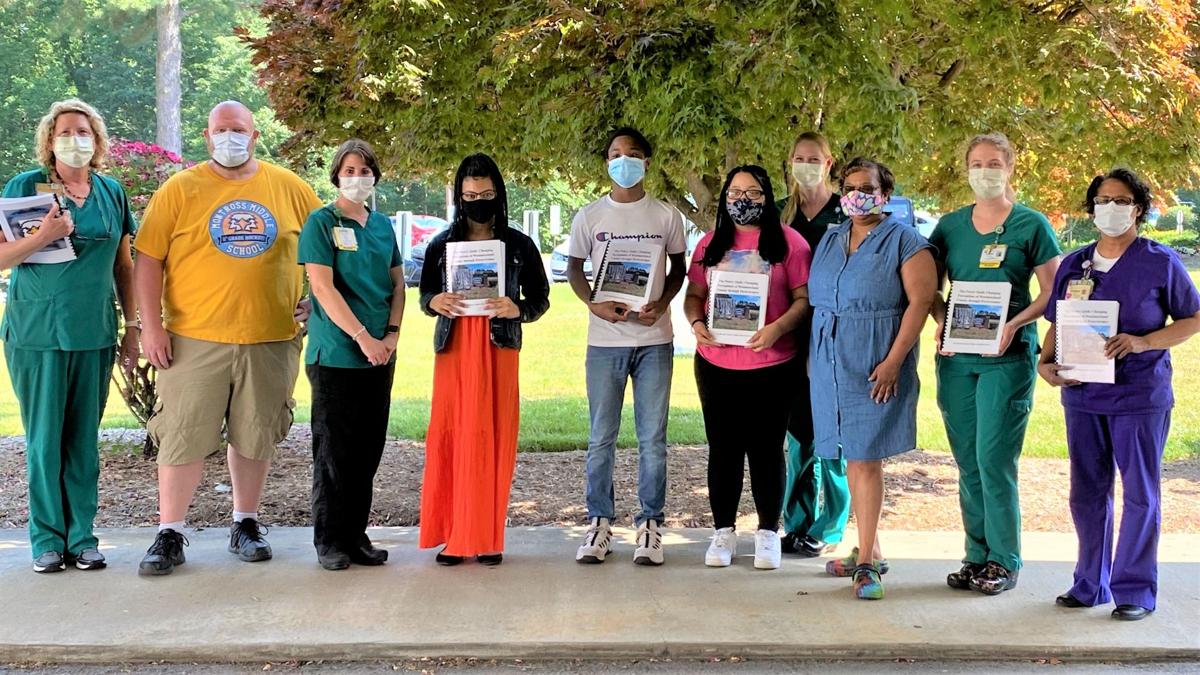 Montross Middle School English teachers Jacob Spears and Monica Weldon present copies of the new Perseverance Poetry Book written by MMS school eighth graders. The book will be utilized by Mrs. Rebecca Beasley and the infusion nurses at Riverside Tappahannock Hospital. The books will be placed in each of the eight bays where patients are receiving chemotherapy and other treatments. Also present for the visit were 8th grade writers Mia Wright, Jonah Mackall and Destiny Coleman.

Montross Middle School English teachers Jacob Spears and Monica Weldon present copies of the new Perseverance Poetry Book written by MMS school eighth graders. The book will be utilized by Mrs. Rebecca Beasley and the infusion nurses at Riverside Tappahannock Hospital. The books will be placed in each of the eight bays where patients are receiving chemotherapy and other treatments. Also present for the visit were 8th grade writers Mia Wright, Jonah Mackall and Destiny Coleman.

Armed with nothing but a blank sheet of paper and a creative mind, over 100 students from Montross Middle School’s 8th grade English classes created this year’s Poetry Quilt book. Students in Mr. Jacob Spears and Mrs. Monica Weldon’s classes worked for over two months on this project. The students wrote original poems, studied and analyzed published poems, and then were directed to try and write about perseverance or cancer. This year’s book is designed to “help anyone who is going through difficulties find a way to persevere and overcome difficult situations.”

It was important to tackle the topic of cancer because this group of students were the last group that Mrs. Linda DeLaney, 7th grade science teacher, had taught. She battled metastatic breast cancer and last April lost her battle. Mr. Spears “beat cancer” last year after undergoing rigorous rounds of chemotherapy. Many of the students had also lost members of their families to this disease and watched them win battles too. The students wanted to honor those who have faced the disease and they also wanted to encourage those who are currently fighting cancer. Other students wanted to write about perseverance or topics of encouragement. Every student found their voice and offered words of inspiration and hope. The resulting book contains 150 pages of phenomenal poetry.

Last year, Montross Middle School 8th grade English teacher Jacob Spears and his students created a book of poetry that addressed changing perceptions.  The students told their stories and the challenges each had faced. Armed with a bundle of poems, Mr. Spears’ mother then created a poetry quilt that was raffled to raise funds for the English department. The funds were used to purchase 40 copies of Bronx Masquerade by Nikki Grimes. This year’s goal is to earn enough funding to be able to purchase 80 more copies so every student can take a copy home.

Once again, Mrs. Evelyn Spears, has created an incredible quilt featuring some of the poems about perseverance and cancer. The quilt features only the poems that could inspire patients. Mr. Spears noted that there were so many quilt-worthy poems that his mother is now making a second quilt that will be kept at Montross Middle School for students and visitors to visit and view.

According to Mr. Spears, students can identify with poetry. “We created a plan for the project. Each poem followed the same pattern of instruction: we would analyze poems to see what made them similar. We defined the type of poem, then we defined terms that were unique to that type of poem, we analyzed published examples of that poem type; then, we wrote original poems of our own. We started with haikus and limericks. We then worked through longer forms of poems. We finished with their favorite form of poetry, free verse. We finished writing our final poems a few days before we were ordered home.”

Mr. Spears explains, “Most of us don’t remember different types of poems; it’s not something we use too often. Learning the types and their attributes are for the SOL’s. Learning a new way to cope with life’s curve balls is for them. To illustrate, Nikki Grimes wrote another book, Ordinary Hazards. It’s a memoir through poetry. She grew up in foster care. There is a powerful poem in the book when she first realized the power of poetry as a release from life’s frustrations; she was six years old: “I read the poem to my students to prove to them that writing isn’t just something they do in class for a grade; it’s a form of release. I hope they take that with them. When life gets them down and they need a way to get rid of frustration, I hope they pick up a pencil and write.”

This year, Mr. Kenneth Ashdown, Chief Ranger of Operations in Virginia State Parks, came to visit the students. A 2015 graduate of Washington & Lee High School, he gave them insight into how “perseverance can be implemented to create success for themselves no matter what their background is.”  He also reminded the students of the numerous resources that are available in Westmoreland County for students to utilize to “create a path to success for themselves.”

The Poetry Quilt and Book have become a great sense of pride for the Montross Middle School staff and students. For Mr. Spears, in particular, this issue that focuses on cancer was quite personal. Currently, he is fine and his checkups are consistently good. “My concern is no longer about my health, but that of my dad’s.  He has stage 4 prostate cancers. He’s finished his chemo and will take pills for the rest of his life to try and keep his cancer at bay. The cancer will eventually win, so his treatments are to prolong his life as much as possible. What makes this more poignant to me was his commitment to help me through my treatments. The chemo stole my energy and my sleep, so he came up from North Carolina to take me to my treatments so that my wife could still teach. What we didn’t know was that while he was caring for me, he was ignoring his own health. While the cancer was dying in me, it was growing in him. His selflessness is the cause of his cancer. I don’t look at that as regret; I see that as an inspiration.”

The importance of the Montross Middle School Poetry Quilt is best noted by Mr. Spears. “One poem that stood out the most for me was written by a young lady who was having a hard time coping with the loss of her grandmother. She wrote a poem that focused on the loss. Her pain was apparent. Our students do a great job of covering up their feelings and hiding what they’re going through at school. They have to; they’re there to learn. However, they don’t always realize that teachers are there for more than just learning. We can help them through situations they may not be able to get through elsewhere. As she stood there crying over her grandmother’s loss, we began talking about the fond memories she had of her grandmother. It didn’t take her long to figure out how to shift the tone of her poem from loss to joyful remembrances. It was an amazing moment watching her grapple with her feelings by enveloping them with fond memories while putting them on paper.”

Because of the coronavirus and subsequent closing of the schools and activities, the sale of the books has been postponed until now. The size of the book is large and in-house binding is expensive. The teachers printed 20 copies of the book and 8 of them are being donated to the infusion center at Riverside Tappahannock Hospital, one for each patient bay. Mr. Spears and Mrs. Weldon delivered these to Mrs. Rebecca Beasley and her staff of infusion nurses at Riverside Hospital. One is being sent to author Nikki Grimes as a thank you for her inspiration of her novel, Bronx Masquerade and one is being sent to Mrs. Evelyn Spears for her incredible quilt making. All the students who wrote a poem received an electronic version of the book in Google Classroom.

Last year’s interest in the poetry book and quilt was evident with the number of sales that took place. Soon flyers and order forms may be found in local stores and restaurants where one can pre-order a book.  Information may also be found in the coming weeks on the Montross Middle School website.