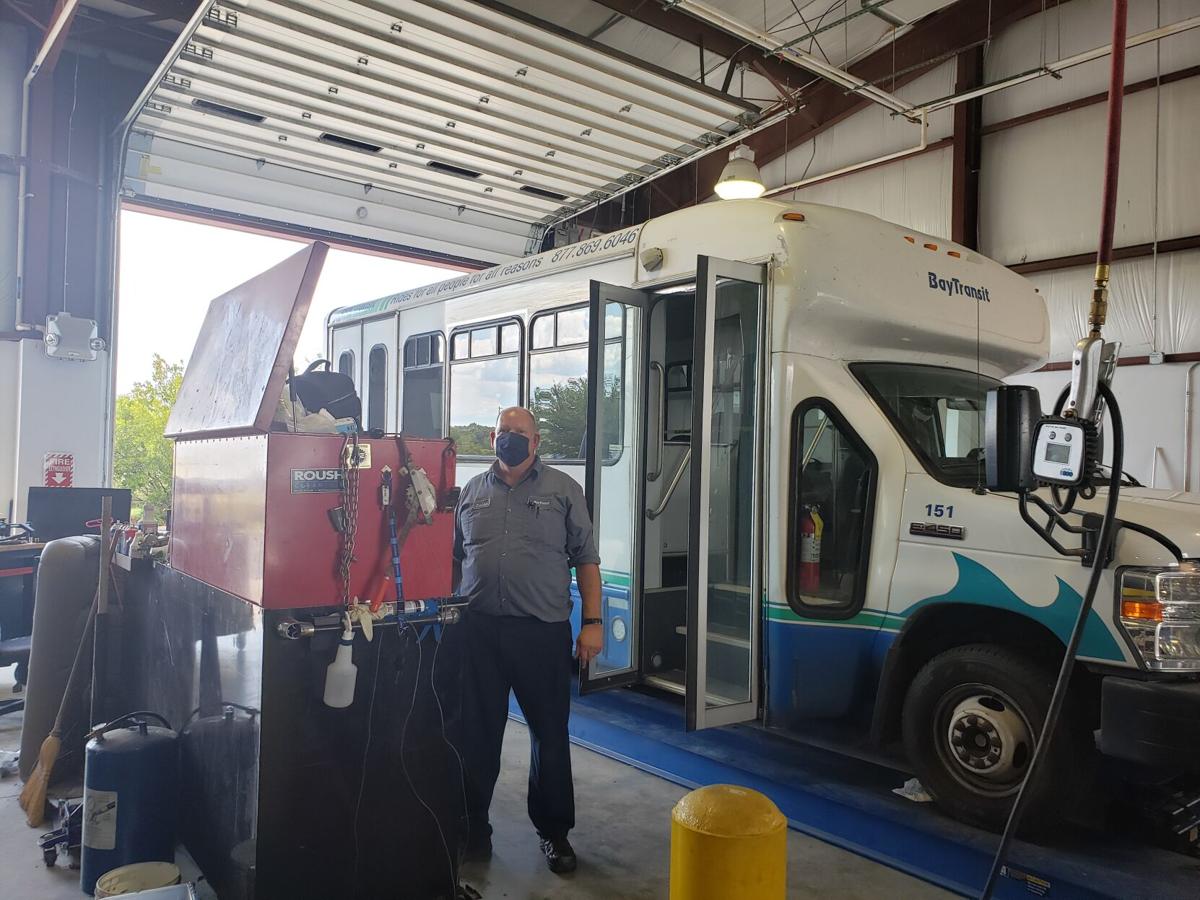 Fleet manager David Fols shows off one of the buses that’s being retrofitted. 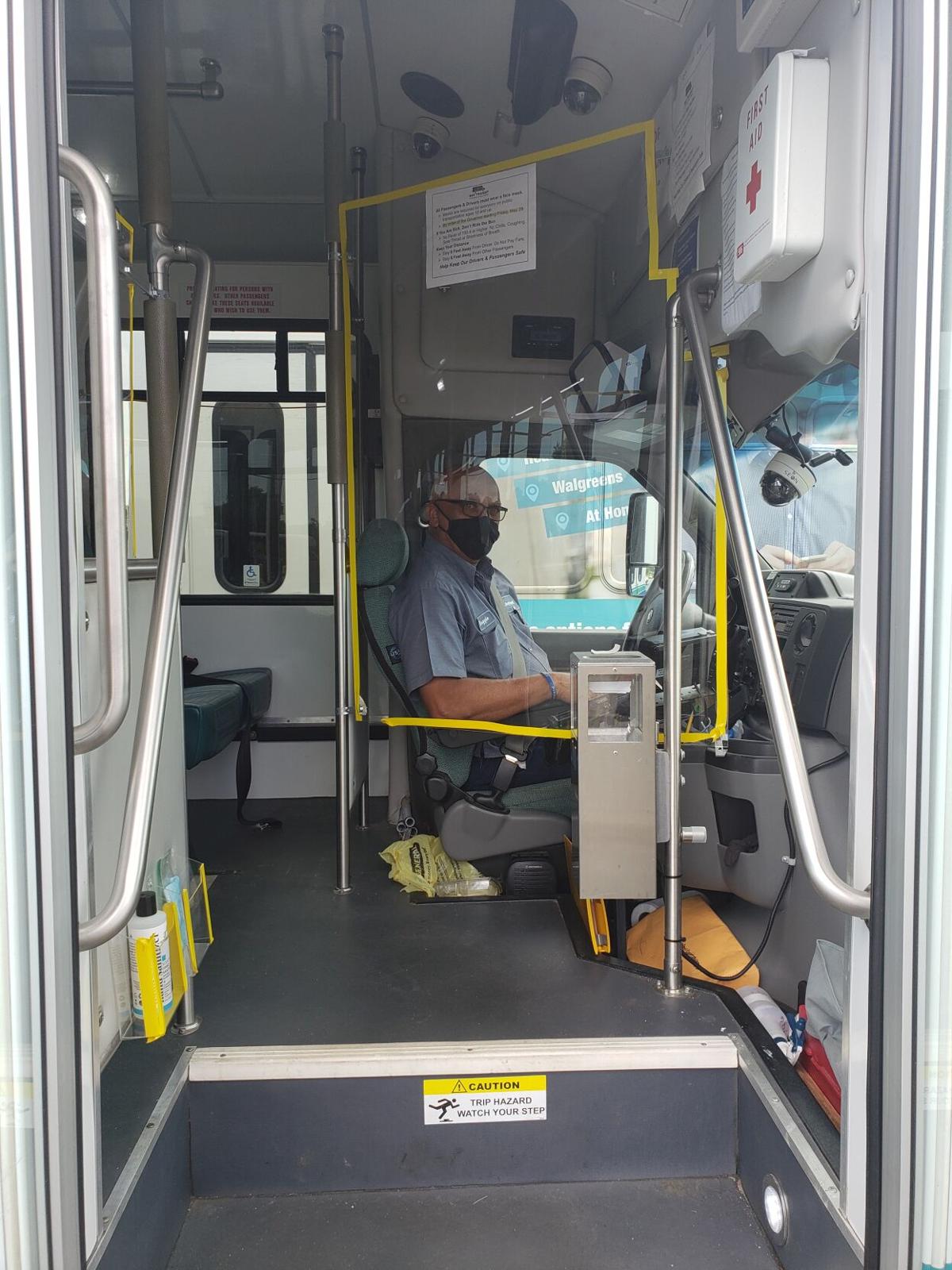 A driver behind the newly installed partition behind the sanitation stations at the doorway.

Fleet manager David Fols shows off one of the buses that’s being retrofitted.

A driver behind the newly installed partition behind the sanitation stations at the doorway.

Bay Transit is investing nearly $37,000 to retrofit its buses as part of The Pledge, an initiative to offer assurance that safeguarding riders and drivers is a top priority.

When the coronavirus hit, the number of rides on Bay Transit plummeted, dropping over 50% between February and April. Last month, ridership began to recover with the company providing 1,269 more rides than in May. But total ridership still remains down about 31 percent compared to pre-pandemic levels, said Mike Norvell, vice president of development and marketing for Bay Aging, the transportation company’s parent.

The Pledge is an effort to instill confidence in people who may be hesitant or debating whether to use the service, and it’s a way to continually remind current riders that Bay Transit is committed to practices that will keep them safe.

Many people don’t have the option to stop riding the bus because a significant portion of Bay Transit riders rely on the service for medical transport and other essential purposes. “So, we want those riders to feel comfortable, and we want to continue to adding momentum to the growing number of riders who are returning to public transportation,” said Norvell.

What is The Pledge?

During a ride-along interview, Norvell showcased the changes the company is making and explained that Bay Transit’s commitment to safety starts in-house before the first customer is served. All drivers, staff and visitors to Bay Aging buildings have their temperature checked and a health screening is done on them that includes inquiries about the individual’s well-being, potential exposure to the virus and coronavirus testing they may have had.

Buses are disinfected at least three times a day with the first sweep occurring before the shift. Then it’s done again during shift changes, and at the end of the day. During breaks in service throughout the day, the drivers are asked to spray the buses and wipe down all touch points.

Furthermore, every time the buses are brought into the garage for service, the filters on the air conditioner unit are cleaned and then sprayed with disinfectant that’s blown through the vents and throughout the bus. The commitment to regularly clean and disinfect is a cornerstone element of The Pledge, Norvell stressed.

To help ensure passengers and drivers remain safe, before reservations are confirmed, all riders are pre-screened through a telephone assessment similar to the one conducted on staff, and the company implemented a policy that forbids anyone with a fever of 100.4 or higher from boarding.

Since all Bay Transit staff that interact with the public are showing support for The Pledge by wearing masks at all times, the company is asking riders to also make a pledge to maintain a six-foot distance from other passengers when boarding or exiting the bus and also wear masks.

“If the bus arrives, and you realize for one reason or another that you don’t have your mask, no problem. Help yourself to one of ours,” said Norvell directing attention to the newly-added sanitation station at the bus’s doorway. It includes a bundle of free, individually wrapped masks and a bottle of hand sanitizer that passengers are encouraged to use when getting on and off of the bus.

Bay Transit has eliminated all fares so riders can immediately get on and take a seat. Until there’s a vaccine or the company can install a touchless payment option that’s effective and affordable, rides will be free for everyone all the time, said Norvell.

Transit direct Ken Pollock said normally Bay Transit brings in about $140,000 a year from the fare box. Although that’s only a fraction of what the company receives from the federal, state, and local governments, operating fare-free for an extended period could put a pinch on budgeting, but it’s a sacrifice the company is willing to make because “the risk of handling cash and fare card is too high,” he said.

In addition, drivers now sit behind a plexiglass partition that eliminates direct contact between them and the passengers.

Riders are asked to only use window seats to maximize social distancing and the capacity on the buses has been reduced for the same reason.

A bus that normally carries 20 people can now carry a maximum of 10, and the buses that normally carry 13 can transport a maximum of seven passengers. And to further ensure proper spacing, some rows will be cordoned off, creating gaps between available seats and providing distance between the passengers in seats and those in wheelchairs. For additional protection, Bay Transit has also added plexiglass partitions between the rows.

Since there is no ready-made bus partitioning on the market, Bay Transit fleet manager David Fols is designing the barriers individually, and he’s working feverishly to get all 46 buses retrofitted as soon as possible, said Norvell.

Bay Transit never stopped operating since the pandemic struck and the company hasn’t had any infected drivers or staff members, and it is striving to keep it that way.

“We pledge to you and our community members that Bay Transit will always employ best practices,” The Pledge states. And to keep it promises fresh in riders’ minds so they will know that it’s always on the company’s mind, Bay Transit will be showcasing the vows made in The Pledge on its buses.