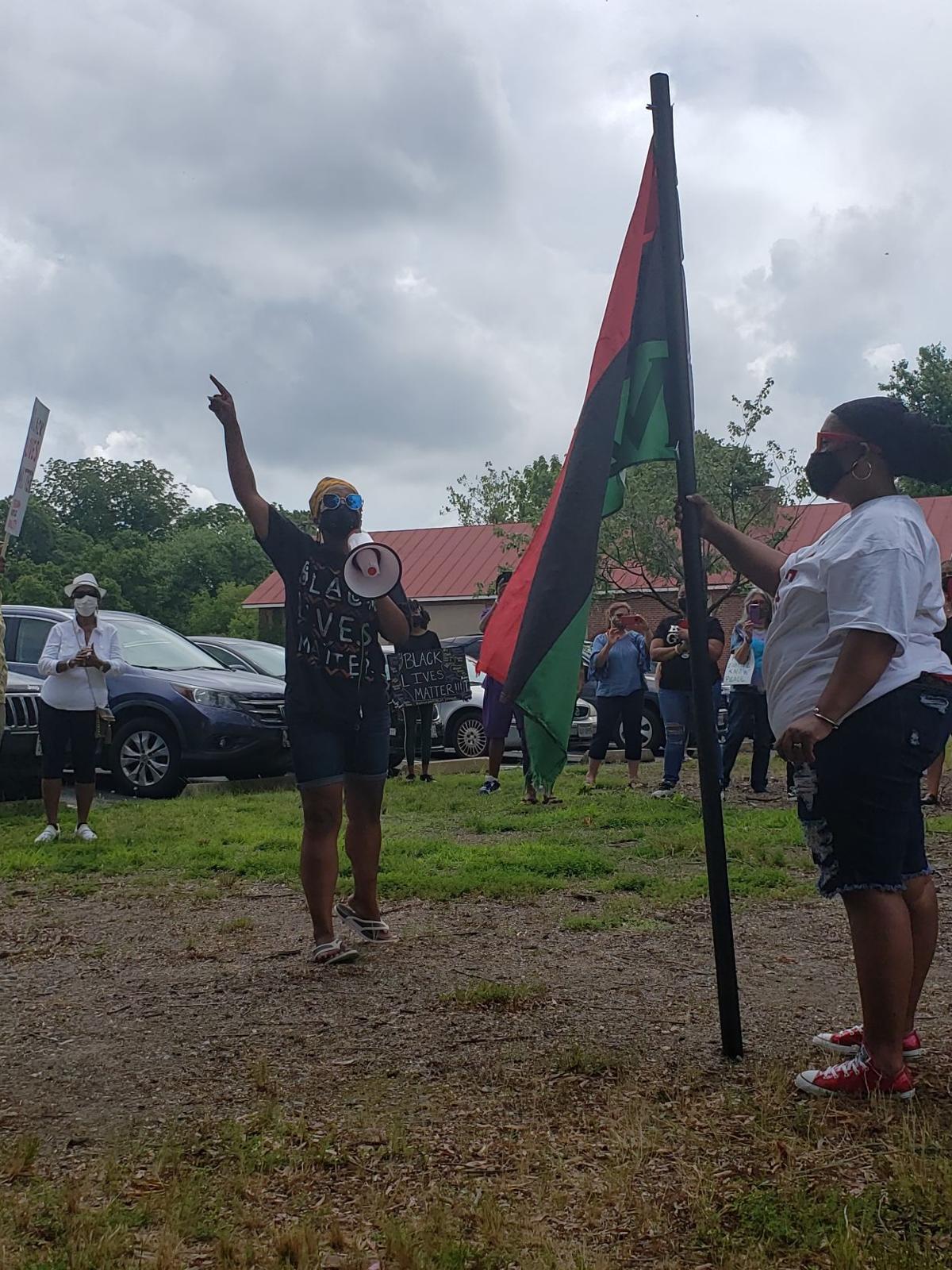 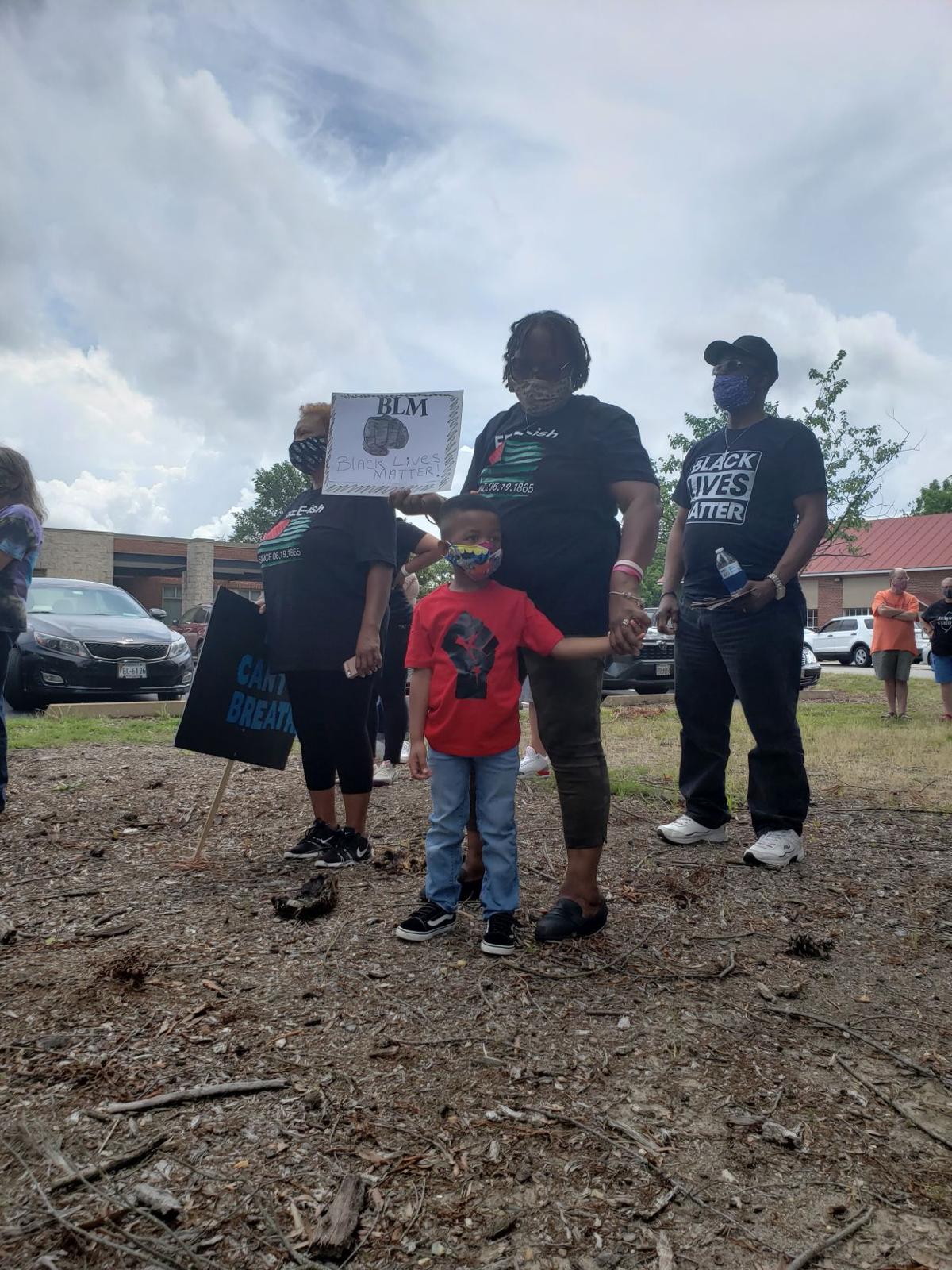 Families came from all around to support this movement for change. 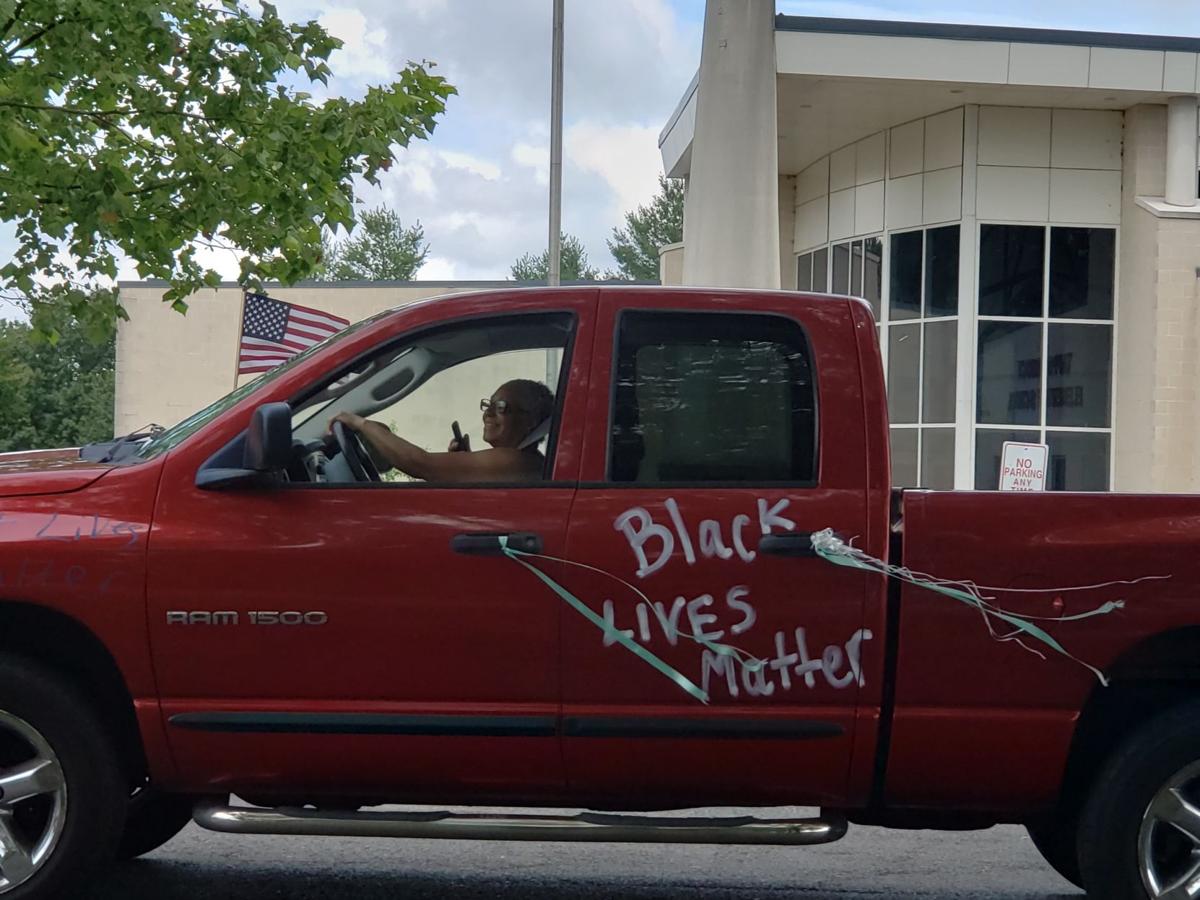 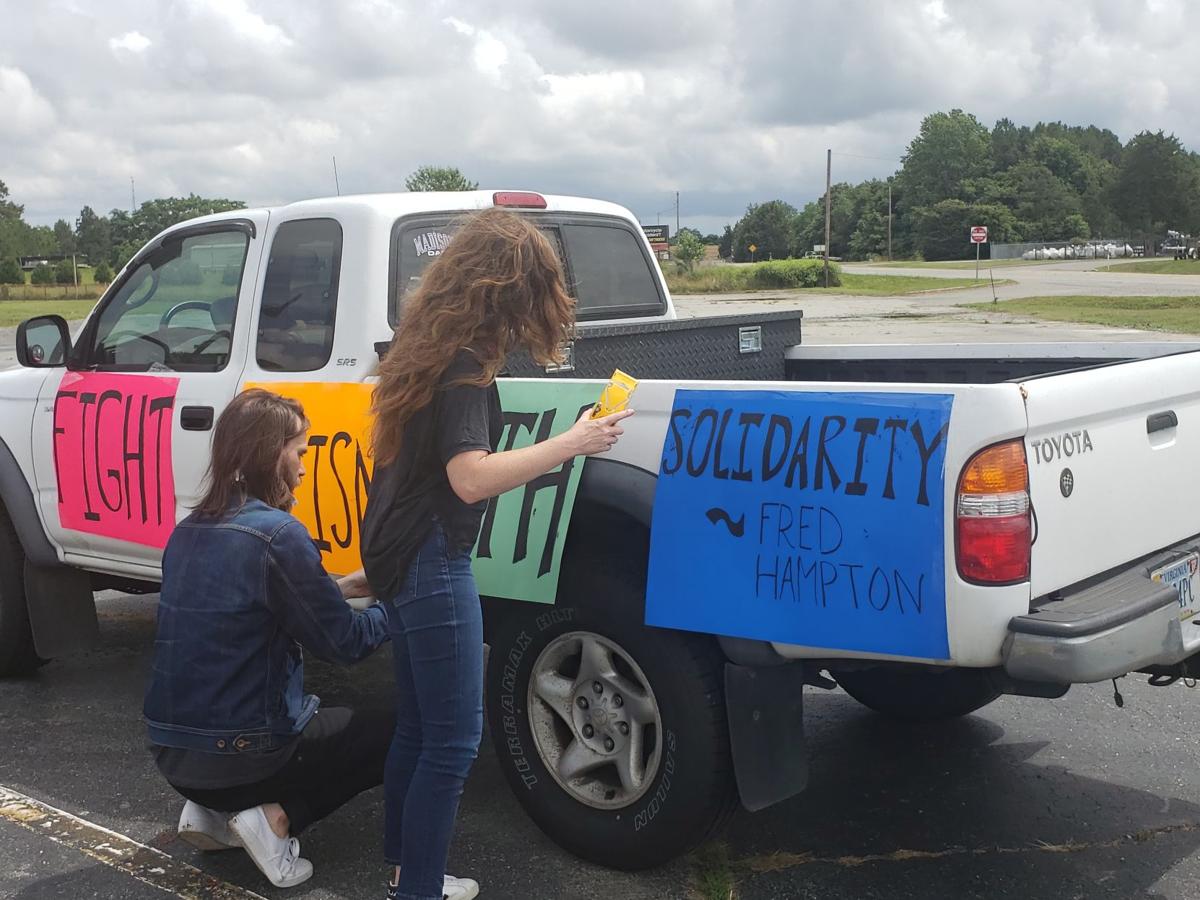 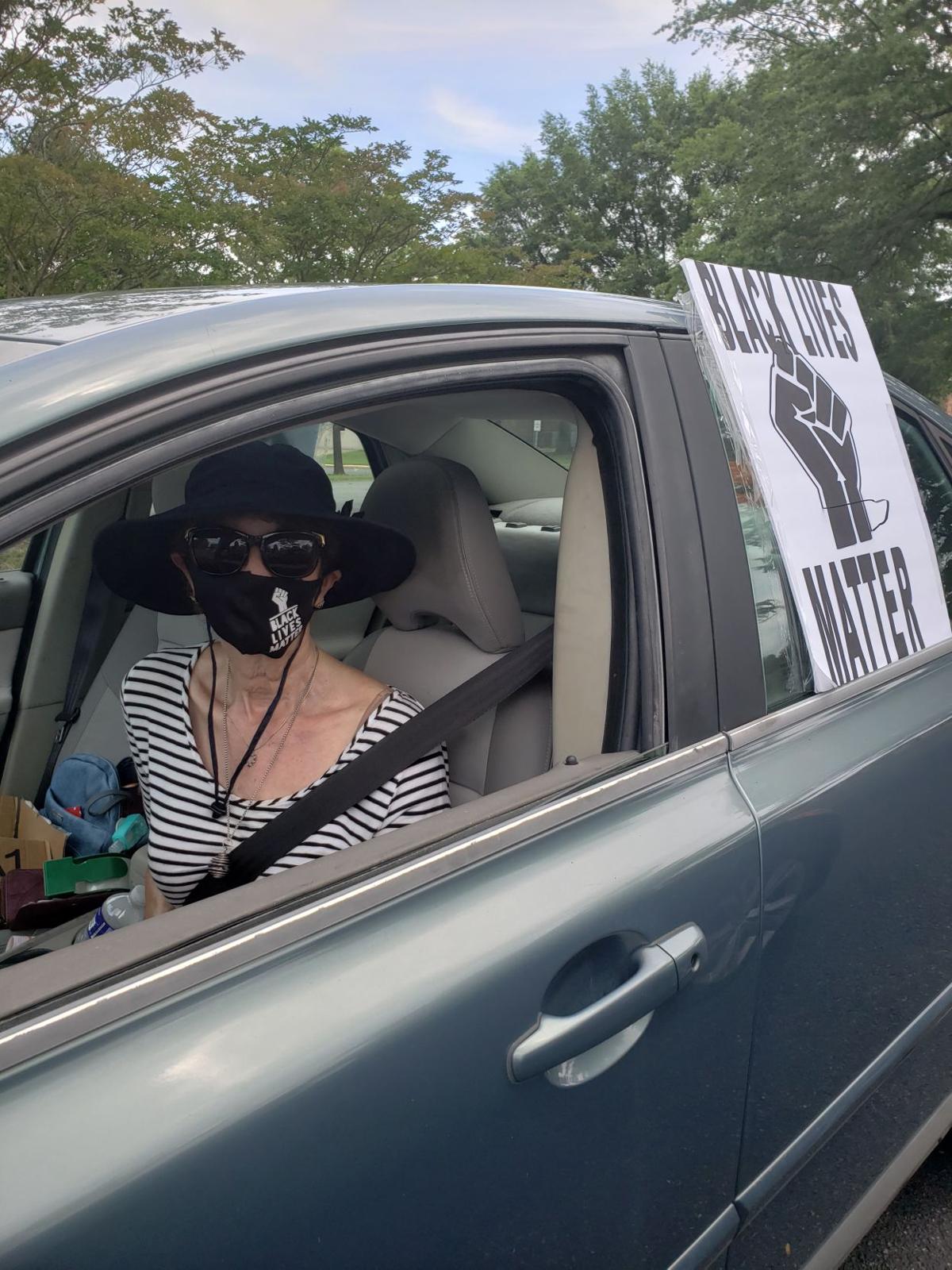 Hope Jackson, a member of the Westmoreland Indivisibles, showed support for the next generation taking action. 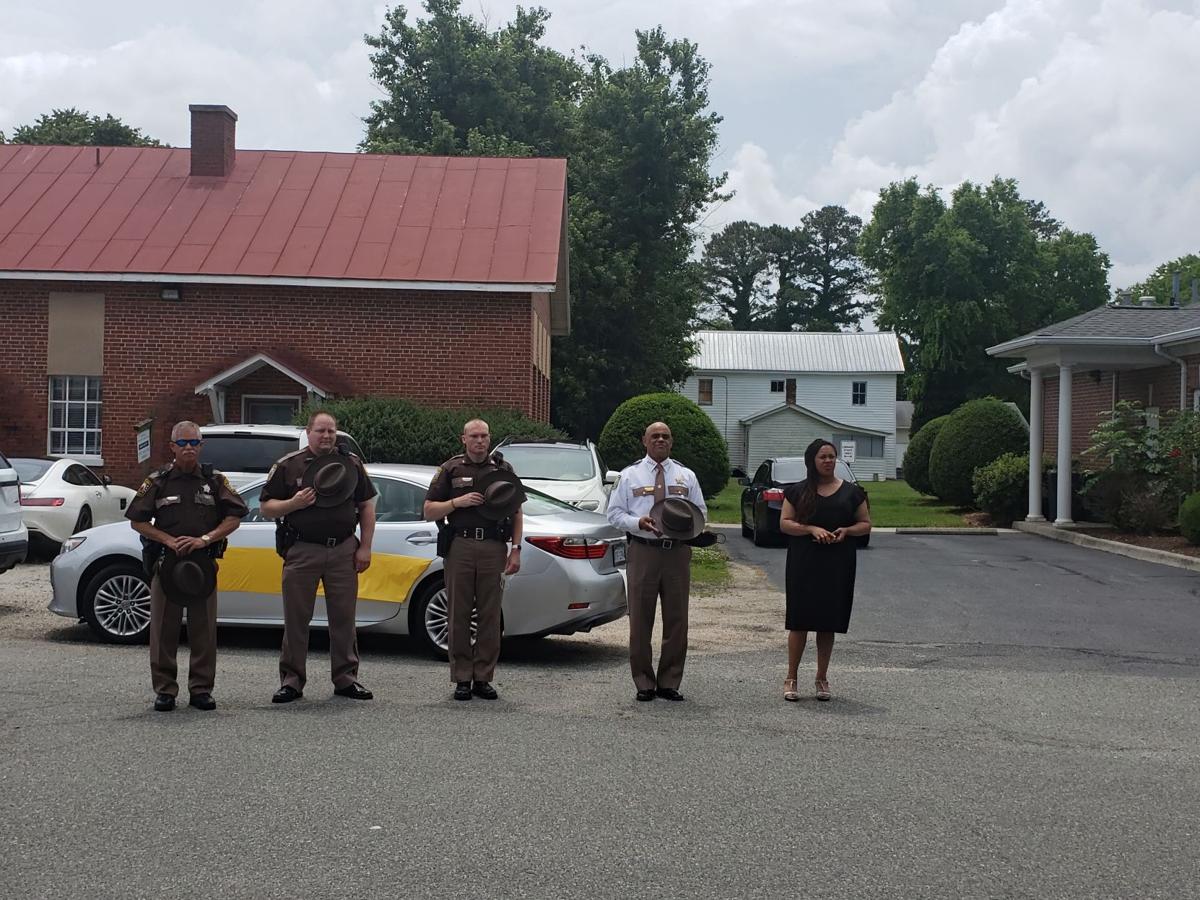 Families came from all around to support this movement for change.

Hope Jackson, a member of the Westmoreland Indivisibles, showed support for the next generation taking action.

The number of vehicles in the Northern Neck Slow Roll swelled from 70 to at least about 120 as the procession made its way from King George to Tappahannock. And people who missed the ride for solidarity, gathered at the final destination to stand for the cause.

The rolling protest, which was organized by Brittany Wood of Montross, began at the Goodwill in King George and made its way through the Northern Neck collecting supporters from jump-in sites in Oak Grove, Montross and Warsaw.

Horns were honking, lights were flashing, and the vehicles were dressed in decorations for the occasion. Along the way, people showed support from their driveways, screaming and cheering the procession on. A truck that met the line of vehicles stopped and the entire family jumped out with signs. More roadside supporters greeted the slow roll as it crossed the bridge entering Tappahannock.

After taking a ride through town, the procession came to a halt at Tappahannock Elementary School, where people gathered as Wood shouted, “no justice, no peace” and chanted “black lives matter.” The crowd responded in like kind.

“Black lives matter and this area needs awareness of that. We’ve got to wake them up. And we did that today,” Wood said. “But we’ve got to keep the movement going. This is just the beginning because when you’re silent and you go and just sit in your corner, no change is going to come.”

Then, Wood handed the megaphone to her special guest, Qasim Rashid, a Democratic candidate for District 1’s U.S. House of Representatives seat. “Spending time fighting for justice is the need of the hour,” he said.

Rashid explained this his family came to the U.S. in search of religious freedom. They were seeking “the American dream, which sounds cliché, but it was very real to us,” he said. But growing up and throughout his career as a human rights lawyer, he has witnessed the racial and economic injustices. “What I’ve realized is a system cannot protect those that it was never intended to protect. A system cannot fail those it was never intended to protect.

This broken criminal justice system is working horrifyingly the way that it was supposed to, and that’s the problem,” he told the crowd.

Rashid concluded with a “controversial” dose of reality. We have the power to produce change, he said. But if all you do is come here and repeat some slogans and hold up some signs. There’s no point in you showing up. Showing up here is the very minimum,” he said. These words were met with a round of applause. Offering reassurance, he acknowledged that changing the justice system seems impossible.

But everything ever asked of African-Americans has been impossible, so let’s do the impossible of bringing equal justice to this country, he said.

The turnout and support

The idea for the slow roll protest was something that popped into Wood’s head and just wouldn’t go away.

“I wanted to get involved but due to the pandemic, I didn’t want to go to DC to march and risk bringing COVID back home,” she explained. And although most of the time she stays in Prince George’s County, Maryland, because the area is heavily populated with African-Americans, she didn’t think the protest would serve as great of a purpose there.

“I felt like if I am going to serve my community, I want to do something for District 1 because I vote here and I feel like the racism is a lot more prevalent [than in PG county.] So, I wanted to bring awareness that black lives matter to this area,” she added.

Given the size of the Northern Neck, she wanted to include as much of the community as possible but also make her event COVID-friendly and family-friendly. “So many people have children and they’re trying to explain what’s going on so I wanted the kids to be able to participate but not be at risk. I looked at how truckers did their protest and got the slow roll idea to keep us in our vehicles,” she explained.

Initially, she wasn’t sure how much support she would get, but ultimately, “it was better than anything I dreamed of,” Wood said. She was impressed by the extent people went from decorating their cars to having shirts and masks made. At the Goodwill parking lot, one family provided a table of supplies that people could grab to decorate their cars in case they forget or decided to join at the last moment. “They went a step above and thought of something that I didn’t think of.”

People came from near and far to show their support. Brothers Vida and Royal drove separate vehicles from Fredericksburg to attend. There was strong emotion in Royal’s voice as he explained that “this [injustice] has been going on for too long. It’s a touchy subject. They’re out here killing our people, killing them with no regard. And people are supporting this,” he said. “We’ve got a president. He’s not a leader. He’s a failure. He’s supposed to bring people together and he doesn’t do none of that. He’s useless.”

There were also people from Northern Virginia, Maryland and North Carolina. Not to mention people from a wide range of demographics.

“I welcomed all. I wanted everyone to come out—for this to be the Northern Neck community ride in solidarity. And for me to actually see that, to see all different colors and ethnicities just made my heart overfill with joy,” said Wood.

Wood described the Northern Neck Slow roll as “seamless from end to end,” and she attributes much of the credit for that to local police.

When she started planning, her first call was Sheriff Christopher Giles in King George. From the first mention, he was all for it and very cooperative. He wanted to give any type of assistance possible. The second call was to Essex County Sheriff Arnie Holmes who was also very happy with it, Wood said. We worked with all the police departments in between, and from the first time I spoke to them, they were all happy and glad that I was doing something that included their community.

Each jurisdiction had its officers escort the procession, and Wood said they didn’t allow an interruption one time.

At the event, Wood thanked all of the county and town police departments individually. “We appreciate you. We will remember who was there when we needed them. We needed them today. They showed up and they showed out. Thank you so much,” she said before the event closed with Lift Every Voice and Sing and a final prayer.

The officers on site raised their fists and removed their hats.