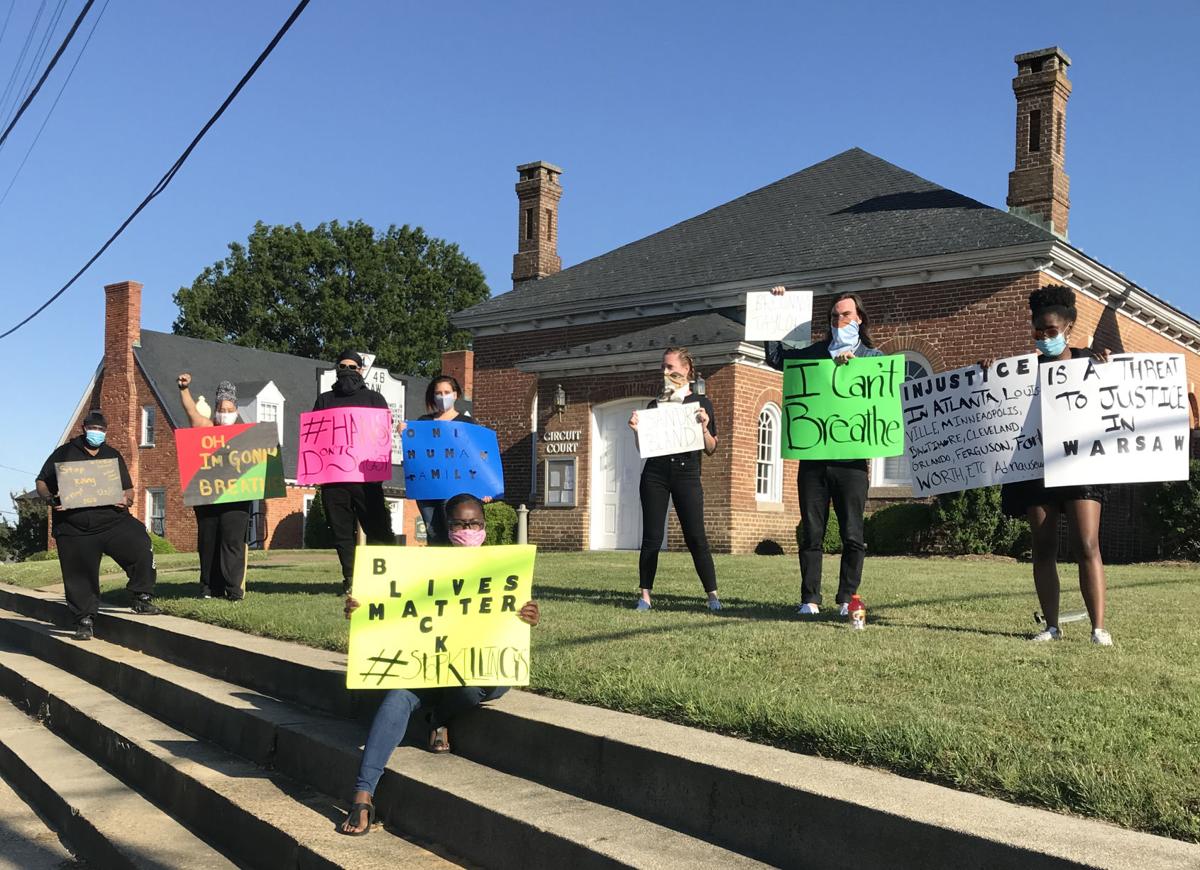 At a peaceful rally in Warsaw, 12 individuals stood on the courthouse lawn with signs in protest of George Floyd’s recent death. 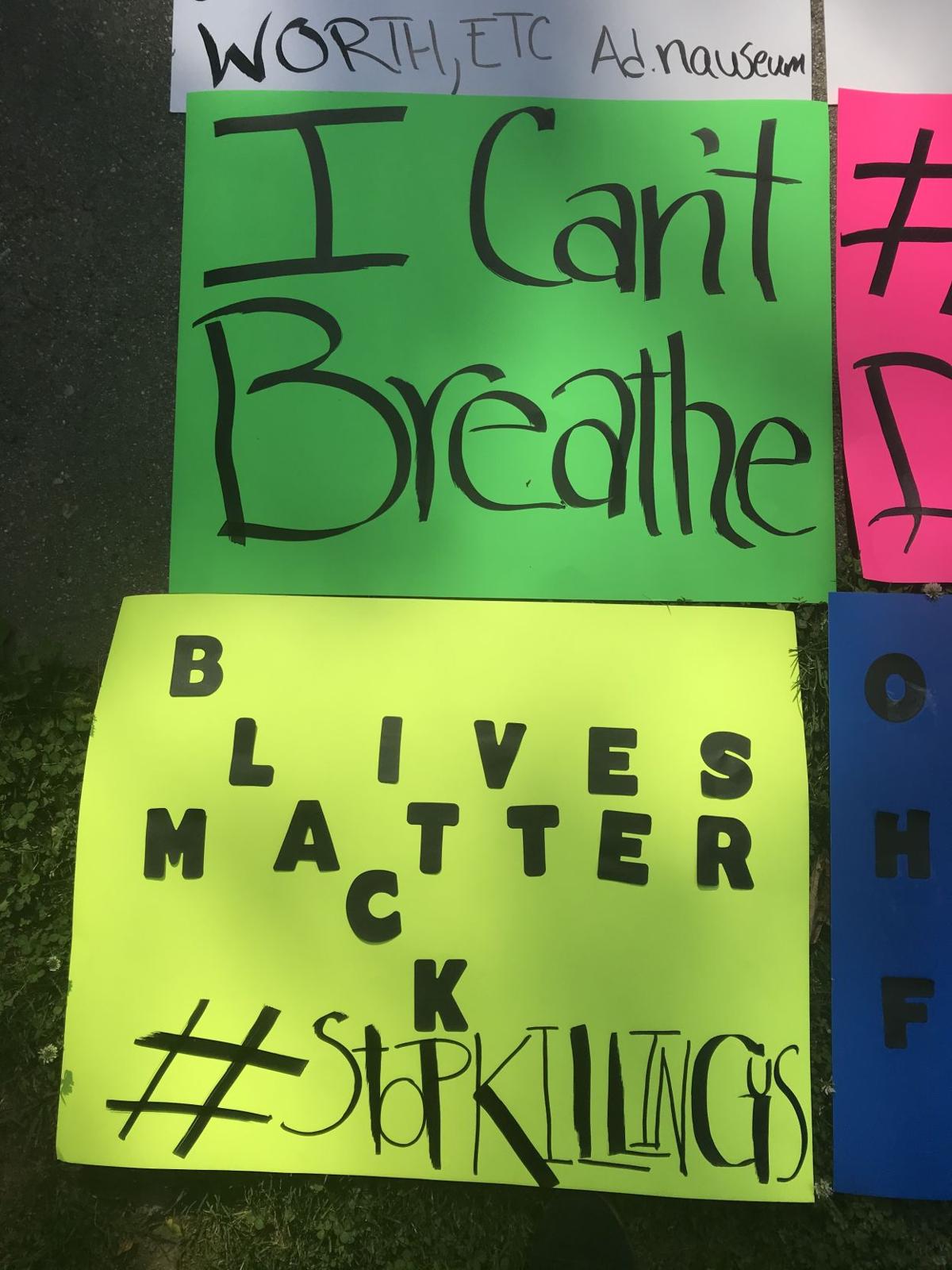 At a peaceful rally in Warsaw, 12 individuals stood on the courthouse lawn with signs in protest of George Floyd’s recent death.

My name is Jaye Gaines. I was an activist long before I was allowed to have a voice. Rappahannock was the crucible that shaped me. That is a white washed tale for another day. I was there visiting with family and checking on my grandparents when my cousin posted on Facebook about her frustration in not having a space to express her feelings openly there in Warsaw. You know, not everyone can get to or wants to go to Richmond or DC and many people are affected by these systemic injustices right here in our very own community. I saw her post and thought seriously about what it meant and proceeded to read some of the comments on this Facebook group from members of the community and it was clear that there was a huge divide but more importantly, that this was something people felt passionately about and that they absolutely should have a safe space to talk about their feelings. So... I jumped in her comments and said, I could meet her at city hall to help organize. I had to be in Lynchburg that morning for work and was trying to make it to my hotel so it was very much a last minute effort. I had no idea when I jumped into her comments that I would be actively participating in the protest but was rather hoping to consult. As I said, I’ve been an activist. I am passionate about helping my community and bettering the world and that has luckily, led me to some interesting people and valuable grassroots and campaigning experience. So, she got cold feet... lukewarm feet before I got to her house and I ended up sitting down with my partner and making signs in the case people actually showed up for what was now an opened can of worms. Once it’s on the Internet, it’s official.

We only had an hour to work and get the message out while also consulting with people I know in the legal and activist communities about the safest ways to plan this potential “event.” Logistics are key and the last thing I wanted was to lead people into handcuffs. I posted a list of expectations for the march and a planned route. When I arrived at the college, no one was there but a few minutes later, I was met by Sheriff Smith whom I remembered from my teen years in Warsaw. We exchanged a pleasant greeting but honestly, I was literally shaking when I saw him and even more so when later another cruiser approached. It was only when he assured me of his support for our cause and offered his help in our safe passage across the street that I breathed a sigh of relief. I was also distinctly aware of the fact that his prompt arrival, his very presence meant that some in the community disapproved of what we were trying to do and had probably called in an effort to hinder our progress. Thank you for your contribution to the cause.

For an hour, the only reassurances I received that anyone was coming were my cousin’s texts and a ton of social media likes. This is or rather,  was the age of armchair activism. I was preparing to walk the predetermined route alone when Sheriff Smith drove over and offered his assistance in procuring the courthouse lawn to increase visibility. We’d already talked about my expectations and actual want for a low turn out due to concerns about the virus but I wasn’t totally hyped about going it alone. Thank God, my cousin arrived just in the nick of time. He led us over to the courthouse where she, my partner, and I stood in silent solidarity as the first few cars approached. It was scary and yet, still exhilarating. A guy got out of his car, raised his fist, and said, “I see you sisters.”

The light turned green and we were all aglow. Over the next hour, one, then, three, then five and six arrived and stood with us. A stranger who turned out to be a high school friend stopped to buy and give us cold drinks. Some people stared with looks of obvious disgust and derision but they were few in number, far more and honestly, it’s not many on a Sunday evening in Warsaw -but far more people gave thumbs up, smiled encouragingly, honked, and waved. More importantly though, people noticed and the entire point, at least for me was to get the conversation started. After all, this is a community. We are neighbors. I’m from a family of preachers, I was taught to love my neighbors. “Hatred which could destroy so much never failed to destroy the one who hated.”

There were 12 of us in total over the course of two hours.

Everyone present has roots or loved ones in Warsaw. We all want to see a better world. I told them then but I’ll say it again: those guys inspired me and I’m sure numerous others. Courage is absolutely contagious. When a brave man takes a stand somehow the spines of others are stiffened. I am proud to have stood with them and I am excited about what the future holds for all of us because of people like them. My call to action was for a small group of dedicated individuals who wanted to make a change.

I was not disappointed.

Since the rally, I have had people post on the original Facebook post deriding me for organizing the silent vigil suggesting I was intending to incite a riot or inspire others to violence. I am surprised to see people upset at such an old school Quaker tactic i.e. the act of bearing witness....but you can’t please all of the people and while I am no pacifist (no true patriot can be), I am a lover of peace.

It is really unfortunate that people tried to misrepresent what we did and what we stood for. There were posts suggesting there was violence which is absolutely untrue. Again, these people, the “other” that people have created in their minds are their neighbors. We are seeking to create the change and community we so fervently believe in. I hope that this gets people talking. Not much happens in Warsaw. It could stand a little change.